He is hurt. He is wronged. And NOW he craves revenge. Yes, you guessed it right, we are talking about our favorite assassin, John Wick, and boy, is he angry this time around!

We wonder how he keeps managing to get into trouble and ends up worse than how he started. It’s one of his talents, the other one being breaking his enemies’ bones and crushing them with a mere flick of his hands. (Krav Maga fans, where are you at?)

Well, it’s no wonder then that ever since the release of a new chapter was announced, fans all around the world went crazy and began angling and prodding for some news, some details, ANYTHING to whet their appetite for the obvious chaos that will follow!

And since we care so much about you, our dear readers, we listened and went through harrow hell (not joking, believe us!) to get you some really hot tea on Chapter 4 of our hero’s story. So get ready because things are about to get wild here!

Yes! It’s been finalized at last. The long-haired, brooding assassin is set to hit the theatres, probably some of his enemies and our dear life as well, on 24 March 2023. And we cannot hold our excitement. Just a couple of months to go and we’ll be able to clap our eyes on this gorgeous man.

And about time too because the last part came out back in 2019 and 3 years is a long time to go without some true Keanu Reeves action. We know you agree. 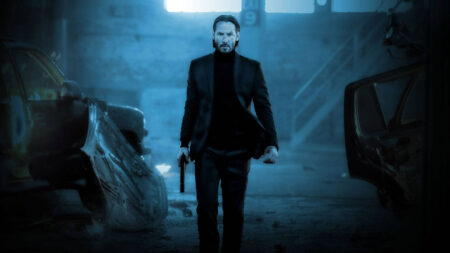 Do you truly need to ask? Maybe Wick’s dog is hurt again. Or maybe someone spray-painted his door with some lewd pictures. OR maybe his barber didn’t style those pretty locks right. What does it matter as long as he gives us those sweet moves and that brooding gaze?

But, we get it. You want a story and a story you shall get. But hey, let’s first refresh our memories a little bit and walk down the memory lane of the previous part, shall we?

The story begins with our man with an elaborate plan to make his point to the High Table. He is sick of all the bloody (pun very much intended) drama and just wants to retire. Preferably with his dog, but hey, who are we to judge? Dogs are cool.

Anyway, so running with the price tag of 14 million dollars, he is a walking treasure chest. And all the hitmen (and women) are looking for a piece of him. Probably the neck! So, Wick is on the run from the mafia and hey, what did you expect anyway? That you will kill one of their members and they’ll let you walk out of there with a medal? Poor Wick.

With the status of excommunicado on his name and people in search of him everywhere who can he trust? Who can he turn to? A plot like this packs just enough mystery, drama, and fight to keep the adrenaline rolling throughout our veins all movie long.

It’s crazy, the hold this assassin has over us, isn’t it? By the end, he successfully gets the High Table to concede to his demands and leave him alone. But not without a chase to the death. Those roof fights are our favorite, not going to lie.

Well, with all the action that the last movie packed in, we are unsure of what to hope from John Wick Chapter 4. But judging from the trailer, we say it’s looking rather good what with a girl and death in his cards. All we can say is this – John Wick Chapter 4 will shock you and probably leave you in tears too. So we hope you bring a big bag of tissues to the theatre. And this time we are not joking!

You can be sure to see Keanu Reeves as John Wick! Yes, we know it’s obvious but it’s such a rush to say his name. Then we have the charming Donnie Yen as Caine. Cain, indeed, because as far as we have heard, he is going to be responsible for a lot that happens to Wick in the movie.

Oh, and how could we forget! We also have Asia Kate Dillons. Yes, again. We wonder what drama she is set to bring into John Wick’s life this time around. Better not break his heart. Or get too close to him. *unloads the guns*

We promised you good news and we have it! Because the trailer for John Wick is already out on Youtube! Cool, isn’t it? Now, we don’t have to wait for months to watch Keanu Reeves in action. We’ll just play the trailer on repeat until March 2023. (And no, we are not crazy. It’s called being a fan! Look it up!)

Well, it’s not yet released so you can not watch the fourth part anywhere before next year. But that doesn’t mean the fun ends here. Because if you were true John Wick lovers, you’ll do what we do – hop in bed, turn Netflix on, and begin the fun from the first movie in the series!

READ MORE: Will there be a fifth season of Stranger Things?

Drishyam 2 Review: Ajay Devgan’s film does not give a chance to get up from the seat, the climax will rock
3 Comments 3 Comments