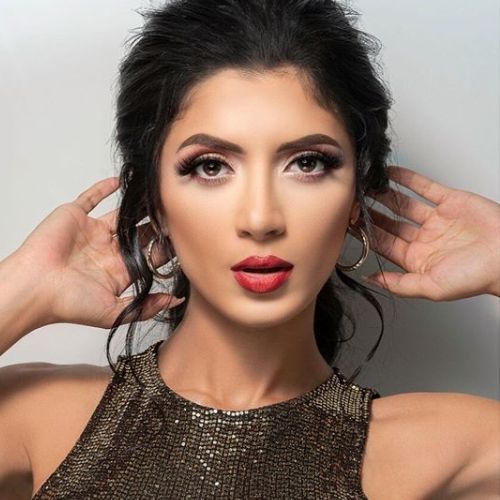 Who is Kimberly Flores?

Kimberly Flores is a model and dancer who was born on April 15, 1987 in Guatemala City, at present she is more recognized for being the wife of Edwin Luna of the band La Trakalosa de Monterrey although she has been involved in several scandals because They assure that Kimberly is only with Edwin Luna for the money.

Kimberly Flores became known as a fitness model and dancer who started by uploading her photos while exercising in the gym that little by little gave her celebrity status on instagram, fashion shoots and other modeling photos with which In a short time he reached 500 thousand followers, a great feat for the young promise.
Later he managed to appear in the music video ” Apretadito ” by the Contrapunticos band, with which he had his first approaches to the small screen.
In 2011 Kimberly was able to be part of the animation group Sur Caribe, along with four other girls, including Gabriela Coronado, of whom she is very good friends with Kim, however the group did not last long and she moved away from the spotlight a bit, returning in 2015 as she was in high demand by some brands who wanted to work with her due to her well-worked body.

Kimberly Flores and her relationship with Edwin Luna

In 2017 Kimberly Flores began a relationship with the Mexican singer Edwin Luna , with whom years later they would have a beautiful girl named Gianna Luna in July 2018, this being her third child, one who lives with her and another who lives with autism. with his mother in Guatemala and who in 2019 would unleash a whole wave of criticism by Kimberly’s mother assured that she did not love that son for being sick and that she was ashamed of having a child with autism, which is why she had abandoned him Guatemala to go live in Mexico and look for a man to support her.

It was said that Kimberly Flores had been the one who got in the way of Edwin Luna and Alma Cero’s relationship, who had been together for 5 months when Kim appeared to destroy their relationship and make him fall in love with her.

In October of the same year, in the middle of the program of “The Academy”, Edwin proposed to her live , to which she accepted because her dreams of having a relationship with a money man had finally been crystallized. The wedding of Kimberly Flores and Edwin Luna took place on Saturday, July 27, 2019 in Monterrey , Mexico but it was harshly criticized because it was broadcast on open television and from which many memes were born in which she seemed very serious, disinterested, unloving and with annoyed face , some assured that she looked very indifferent and unhappy while Edwin Luna came to tears while they swore eternal love.

After the link, the newlyweds embarked on a romantic honeymoon in Dubai, which they did not stop showing off on social networks but was also highly criticized because he called her ” ordinary ” and with little class because she wore quite exuberant outfits and with very little fabric showing its attributes in what is considered the most exclusive country in the world. “You won the lottery with Edwin, what you wanted” they wrote a lot to him.

Faced with so many attacks, Kimberly Flores came to comment in one of her posts on social networks: “Today I wanted to leave you something that I have brought here for many days. Many times they ask me in the media, yourselves (referring to your fans), they ask me what it feels like, if it hurts, what I think about being criticized sometimes so much or so hard and my answer is like this: when you have yourself self-love, I believe that what others think, think or say the truth does not matter “, Kimberly expressed hoping that things would change however in Mexico due to her history with the singer and her own personality does not end up radiating something good and on the contrary has created that everyone practically attacks her daily, either because of her vulgar style of dress that It does not match that of a married woman, her little intellect and her body that many have assured is highly operated and false and even in October 2019 a photo unleashed her criticism as much as possible because her breasts looked quite separated from each other.

At the end of 2019, Edwin Luna published the video for “Es Muy Irresponsable” that he starred in with his wife, Kimberly Flores.

In February 2020, Kimberly Flores thanked the support she had received from Internet users for having reached 1.1 million followers on Instagram. Although many applauded her feat, others on the contrary attacked her, narrating: “More than half of your followers hate you”, “She is a holy virgin”, “Get to work”, “She looks like her mother and so much that she hates her “,” More popular than the Kardashian “ . They were some of the comments for Kimberly Flores.

Later, Kimberly Flores and Edwin Luna were invited to the morning program “Hoy” on Televisa, confirming with this that they would be supported by the television station again and having left TV Azteca because Edwin had not felt true support for his career since he left. with them to do “La Academia” and that they were wasting it.

The model and now wife of Edwin Luna has three children, one of them with the vocalist of La Trakalosa de Monterrey and two more from old relationships , in fact one of them is sadly ill as he has autism spectrum disorder.
Much has been said that Kimberly abandoned her sick son since she has never shown the face of her first-born Elian since one lives with her and her new son and the eldest is residing in his native Guatemala living with his grandmother, that is, with the mother of Kimberly Flores who on some occasion declared that her daughter gave her son as a gift and that is why she lives with her.
Kim’s mother assured that she did not love him because he had autism but sent him to say “Everything in this life is paid.”

Years before she met Edwin, Kimberly Flores was known in the underworld as “La Kimberly” and had an affair with “El Chico Disney” from a television program that many in Guatemala considered very common and vulgar, in fact she came to working in bars and nightclubs where she worked as a pole dancer.

Becky Colombani, the model’s mother, exposed her to the media in 2019 because she assured that she and her daughter came to the blows some time ago, when Colombani asked Kimberly to take care of her own son. The model’s mother herself has said that she never finished high school, that she was looking for money from men and that she is a bad mother. He has called her an alcoholic, ambitious and a home breaker. He got to the point of saying that “little by little and taking money from various men, the whole body was operated to look as we see it today.”

The worst statement would come when Kimberly Flores’ own mother assured that she was only with the singer Edwin Luna of La Trakalosa de Monterrey because she was interested and because of his money and his fame since she did not like “short and dark men ” ”Referring to the physical aspect that fits perfectly with Edwin Luna.
Although the reality is that Edwin is not an expert in candy either and has also had quite stormy relationships and some children with other women, in fact they say that he abandoned Alma Cero (famous for his role in María de todos los Ángeles), to walk with Kimberly Flores.

Alma Cero and Luna separated because they seemed to be extremely in love but their marriage only lasted 5 months when Kimberly Flores appeared in their lives and meddled between them so that Edwin Luna would marry her and leave Alma Cero, which happened.
Given this, Alma Cero commented: “I don’t think it was Kim’s fault, we women let ourselves fall in love and believe what we want to believe, I can’t judge anyone… but it was very obvious that she knew she was getting into a marriage and she decided to fight to stay with Edwin … well they say that for women like her you lose husbands who are not worth keeping.

How much does Kimberly Flores earn?

This is one of the questions that people ask the most about Kimberly Flores and although they always end up answering it on other pages with “I don’t know” or “it depends” and even because of “it is regarding the number of views” the truth is very clear. Kimberly Flores would be earning about 1 million dollars for every million views; In other words, for each video that Kimberly Flores uploads today, she would be earning approximately 25 thousand pesos since her videos reach an average of 1.5 million views.