MEXICO CITY – Kimberly Flores raised the temperature this weekend by posting a photo posing with a tiny string bikini.

Thank you all for your support, we are still inside #LaCasaDeLosFamosos. Who is watching reality?”, Wrote the Guatemalan model in the caption of the photo.

In the image, you can see Kimberly Flores posing in profile with a small red swimsuit with which she showed off her marked anatomy.

Her outfit was combined with a yellow scarf, earrings, heels, and red lipstick with which she highlighted her face.

In the snapshot, Kimberly poses outdoors while gazing at the camera with an empowered gaze.

After her community manager shared the photo, she garnered more than 56,000 “Likes” and hundreds of comments from followers who praised her charms.

In recent days there has been speculation that Edwin Luna’s wife has had strange glances and flirtations with Roberto Romano and Christian de la Campa within the reality show La Casa de los Famosos. 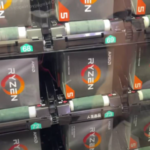