On Facebook, police officers showed how they detained the “Grinch”, who was about to ‘steal’ Christmas. The fact has generated praise in the social network. 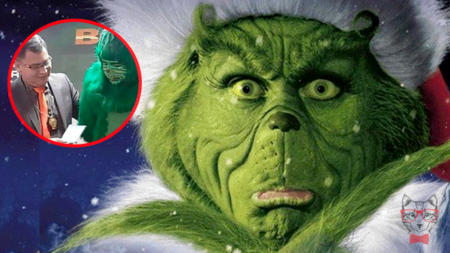 Just a few weeks before the end of the year party, a group of police from Bolivia have surprised thousands of Facebook users by revealing that they had arrested the “Grinch” before it steals Christmas.

The fact was shared in a Facebook portal and has not stopped being commented by thousands of users who were surprised by this unexpected act that enclosed a message that is already viral in the social network.

In an unexpected symbolic act, a group of police from Bolivia decided to surprise thousands of Facebook users by staging an alleged arrest of the popular Christmas character called the “Grinch”.

As we could see in the images shared in a Bolivian Facebook portal, the police presented the capture of the “Grinch”, who was allegedly caught trying to ruin the end of the year parties.

To the astonishment of thousands of users of this social network, the police performed a performance in which they arrested this character who appeared in a movie and stole Christmas. Although it is known, this character only exists in fiction, the truth is that the police decided to make this staging to imply that they will be more than attentive to every move made by criminals, who at these end of the year They increase and steal the belongings and money of thousands of people.