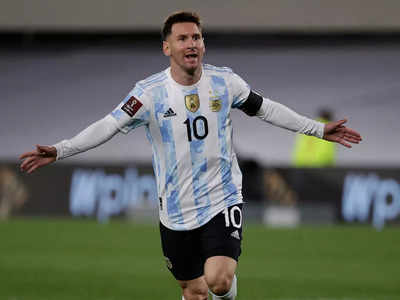 The Argentine superstar put on a show as he led his nation to a 3-0 victory over Bolivia in Buenos Aires.

After the chaos in Sao Paulo when Argentina’s clash against Brazil lasted just seven minutes, this is exactly what La Albiceleste needed.

The Argentina captain then moved one clear of Pele in the 64th minute with his second of the night, surging into the Bolivian box and playing a one-two with Lautaro Martinez before tucking away a finish from close range.

Messi completed the seventh international hat-trick of his career two minutes from time, burying a rebound from close range after a shot from the edge of the area was only parried by Lampe.
The former Barcelona star’s great rival Cristiano Ronaldo holds the outright record for goals scored in international football with 111 from 180 games

The victory came just four days after Argentina were embroiled in controversy with regional rivals Brazil in Sao Paulo, with the two teams’ qualifier on Sunday abandoned after seven minutes due to a Covid-19 controversy.

The top four teams qualify automatically and the fifth-placed side goes into an inter-regional playoff. Earlier on Thursday, Miguel Borja scored two goals in two minutes to put Colombia on their way to a 3-1 victory over Chile in Barranquilla.

He got the first from the penalty spot after 19 minutes and then ran through on goal a minute later to slip the ball under the keeper and make it 2-0.Jean Meneses pulled one back for Chile in the 56th minute but Luis Dias restored Colombia’s two-goal lead with 16 minutes left. Colombia are fifth in the qualifying table, tied on points with fourth-placed Ecuador, while Chile are eighth.

Meanwhile leaders Brazil counted on Neymar to secure its eighth win in eight matches, an easy 2-0 victory over Peru on Thursday.

Brazil has 24 points and second-place Argentina 18, both with eight matches played, one less that the other rivals after their superclasico on Sunday was suspended due to COVID-19 protocols. FIFA has yet to decide whether that match will be replayed.

Earlier Uruguay had a 1-0 victory over Ecuador to move into third place on the table.

South American World Cup qualifiers are scheduled to have another three rounds in October, which could trigger another war with European clubs that don’t want their players to travel to the region due to demands for quarantine upon their return. Except for Argentina and Colombia, no South American team managed to bring their Premier League players for the international window.

The top four teams in South American qualifiers get direct spots at next year’s World Cup in Qatar, and the fifth-place team will go into an intercontinental playoff.