Mexico.- The communicator Rafa Sarmiento and his wife, the host Jimena Pérez , better known as La Choco , have faced bad times due to the discrimination they suffer when having a child with autism, so much so that they were even denied entry to a restaurant recently .

“Having a child with a disability is being judged every day,” said Rafa . “It is unpleasant and difficult, but it is our turn, you end up because you don’t care about the looks. Nobody knows what the backpack weighs more than the person carrying it,” he added.

On more than one occasion, the communicator and the driver have faced bad times due to the ignorance that exists around this disease. Recently, they shared on social networks a case in which they were denied entry to a Japanese food restaurant in Mexico, for bringing an assistance dog that helps their son to be calm. 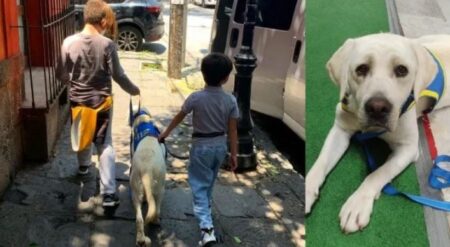 What happened was that they arrived at a commercial plaza in Acapulco; four adults, two children and the dog, named Wasabi, identified as PSNA (Service Dog for Children with Autism), and although they brought all the certification papers, they were denied entry.

After disclosing his experience, one of the managers of the restaurant chain contacted him to clarify what happened, accepting the error and committing to train his staff on inclusion, service dogs and hygiene rules.

For the Sarmiento-Pérez family , this was a great triumph to achieve the visibility and sensitization of a group of employees with special people, as the group will help their team with information on service dogs for people who are autistic, as they have training specialized.

Just a month ago, the couple disqualified the comments of Vicente Fox, the former president of Mexico, after using the word “autistic” in a derogatory way. Last year he was also attacked for going out with his little one during the pandemic, when the country had prohibited it, however, the government allowed it because it was a necessity of the minor.

Despite continuing to receive constant criticism and attacks on social networks, Rafa Sarmiento assures that he will continue to raise his voice for his son and at the same time for people suffering from autism. In Mexico, around one million and 200 thousand people have been diagnosed with the condition.