Part of the discussion around ‘ Parallel Mothers ‘ has revolved around Pedro Almodóvar ‘s reflection of motherhood, trying to include different perspectives around it. But mothers are a recurring theme in the Manchego’s filmography and, seeing the uneven result of his latest film, we must say that they have had better portraits in the past.
On a day like today, where we celebrate mothers from all over the world, it would be her thing to catch an Almodóvar film to celebrate motherhood. As we have said, there are varied examples in his work, although there is something inexplicable but strong that attracts us to ‘ Volver ‘, available on Netflix . Perhaps not only because it’s where he most directly confronts mothers, but because it’s one of his best films of his, period.

Return to a town in La Mancha
Like the story that he presents to us, Almodóvar’s story with this film is back to his roots , to his people. After the international applause of ‘Talk to her’, the director decided to return to something more elementary, less raised, although he continued to enter into certain truculent moralities. Melodrama is still the main genre, but the impression was that there was more room for lightness and also for amplified comedy , even for a hint towards genre and ghost cinema.

In other circumstances it would be a minor film, but that was not the case with ‘Volver’. The story of Raimunda ( Penélope Cruz ) was widely received , trapped in a stagnant marriage with an unemployed worker ( Antonio de la Torre ) while she and her sister Sole ( Lola Dueñas ) hear stories that their mother ( Carmen Maura ), killed in a fire, had returned to the village.


Both ignore these stories, but Sole suddenly runs into what she considers to be the spirit of her mother, while Raimunda ends up killing her husband after he tried to rape their daughter.

All this is a lot of moves, but they are only the first minutes of the film, showing how boisterous the films of the manchego can be. There are deceptions, robberies, murders, reflection on the past , but even so the impression was that Almodóvar was making a comedy. And so it is in part, combining his enormous neorealist influence with Castilian costumbrismo , also playing with ghost stories and even allowing himself a small (and brilliant) musical moment.

‘Volver’: between us we managed
Almodóvar makes a perfect exercise to unite all this in a digestible tone that also serves the story, which is counting with great care to let those connections between women , between mothers and daughters, flourish, and reflect on generational traumas and how women they have historically endured.

It would have been difficult to sustain all of this if we didn’t have an extremely inspired cast with outstanding actresses , especially a Penélope Cruz more brilliant than ever. In the end, “between us we managed”. Phrases like this are released naturally, but they contain meanings of great strength and genuine emotion, which show the true passion of the director to dedicate this to the women who were there while he was growing up .

Very powerful moments, but told from calm and closeness. That is why ‘Volver’ is the film that has most reconciled Almodóvar with the public, and that is why it is an ideal choice for a day like today.

The house of the dragon’: spectacular trailer for the prequel to ‘Game of Thrones’ with which HBO Max will compete with ‘The Lord of the Rings’
Next Article 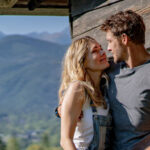