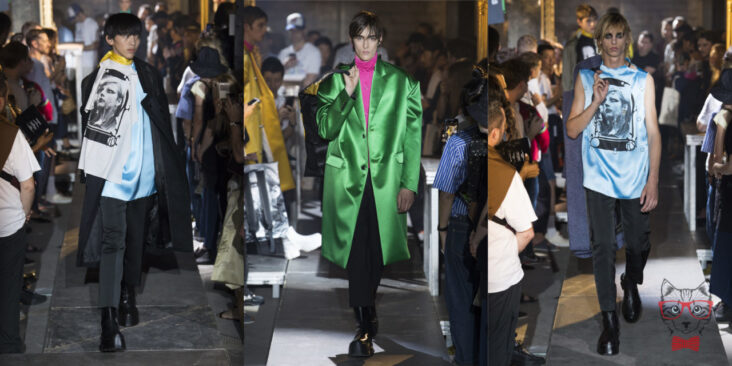 The men’s summer 2019 season ended yesterday and left a strong message in the air. Not only because of the weight of Virgil Abloh and Kim Jones’ debut in Louis Vuitton and Dior, respectively, but because a new desire arose on the men’s runways. More than a simple desire (after all, fashion is made of them), a real change has sprung. Haute Couture, the fashion in its most special format and made only for the delight of women, has become the center of attention, only this time for men.

Look at the essence of feminine fashion – romanticism x sensuality – and incorporate into men’s attire. It is not a gender bender nor a feminine man. Nothing is obvious and the reading becomes even more interesting and open to interpretation.

The insertion of the values ​​of Haute Couture in the masculine was exactly what gave the tone in the debut of Kim Jones in the Dior. Not only did he bring in the couture technique, but he was inspired by Christian Dior himself, bringing elements like his favorite color (the rose that appears in two suits), the colors and patterns of the porcelain set where dinner was served, the designs they decorated the first shop of the brand in Paris in 1947 and the bees that were a symbol of the Dior in the 50’s. The ultra delicate transparencies, the light colors and the floral embroidery have undoubtedly brought a new feeling for the brand – and why not , for the segment. “I would call it romantic rather than feminine,” Jones told reporter Sarah Mower.

All of it blended with the designer’s streetwear vein and collaborations with cult designers such as Matthew Williams of Alyx and Yoon Ahn of Ambush who created accessories and jewelry for the collection.

The pop appeal was due to the participation of the American artist Kaws, who created a sculpture of the BFF doll made with 70,000 flowers, reproduced in a fluffy little animal exhaustively photographed with all the invited celebrities (and not few). Witness, sensitivity and contemporaneity.

John Galliano, in his own way, also enters the conversation, approaching the universe of the couture (which he knows from top to bottom) of the masculine of Maison Margiela. Same insight, by different paths. “It is the most noble form of sewing, only for men. I hope it defines a new sensuality, “John explained in a podcast delivered to the press.

It was at the Met Gala that he was inspired, as he noticed the changing codes of formal clothing. “See the young people and their interpretation of black tie … It’s a seismic change,” he says. Thus, fueled by the young energy, he proposed a new idea of ​​masculinity, bringing all the richness of the cut and the decoration usually reserved for haute couture workshops. Impeccably cut blanks come shorter and wrapped, the kimonos that Galliano loves also win their versions, there are transparencies, corsets and vinyl leggings. The female influence is clear, but it does not make the female man. It is a sexy and strong image of a new masculinity indeed.

And then comes Raf Simons yet with another perspective. Using the technique of couture, Simons made coats and jackets in satin in varied colors and cut them well wide. The looks were influenced by the punk and new wave scenes and Yves Saint Laurent with their incredible color combinations. Pictures of the punk scene in London featured satin t-shirts, some without sleeves. “Everything but a few suits and jersey looks was made in satin duchesse,” he told reporters. It is satin in its most luxurious form – the fabric is very common in wedding dresses and needs a little technical not to wrinkle. “It has all those punk references, like pins, leather and tacks, but I’ve been thinking about how to use them differently so you can not recognize them.”

It is worth noting that Raf’s inspiration comes from a weariness with streetwear moment that dominated fashion. He, who is the God of all this generation (Virgil, Kanye, Kim, etc.), has been and has done a thousand times, always broadening the conversation around the men’s fashion and beauty concepts. “We need a new element. I know I was a part of that culture, but there are too many motifs in print today! Something has to change. ” Anyone who knows the influence of Raf will not let that phrase go unnoticed. Let’s wait for what comes around.

At Valentino, Pierpaolo Piccioli also made his parade an encounter between streetwear and Haute Couture with the apex of this dating seen in the ostrich feathers stuck to the back of the sneakers, peacock wings sewn in a gray sweatshirt and a camel trench coat and sports jackets with embroidered animals. “It’s how Valentino can stay relevant to today’s generation. I want to get out of that aura of exclusivity and be more inclusive. I really want Haute Couture to come to life. You can not just keep it.

The point is that Haute Couture was born and was built as a pure concept of exclusivity. It is very expensive to make and its pieces are created for collectors and non-consumers. But nowadays and in this current configuration of the world, with all its transformations in progress, surely it is time to rethink those values.

Finally, the Virgil Abloh parade for Louis Vuitton does not revolve around Haute Couture, but is within the desire for freedom and other languages ​​for men’s fashion.

Unlike the other examples above, the strength of this presentation is in the symbols much more than in the clothes. It’s what we do not see on the catwalk that makes the parade so impressive and important. Abloh is the first black man to reach that position. An American in a high-class maison in Paris, with no formal fashion education.

As a metaphor for his trajectory, he used the film The Wizard of Oz. The image of Dorothy and her friends on the yellow brick road is by itself a complex association of symbolism. Everyone goes in search of the Magician to achieve something: to return home, courage, heart and intelligence. But what the journey teaches them is that all this is already within them. The only thing is that you have to go to the end to figure this out.

Add to this an unrestricted budget parade displayed simply in the gardens of the Palais Royal, on a rainbow walkway that shows your concern for inclusion, not just gender but also racial. Marketing? Strategy? It has all this, after all, it is a billionaire business. But in the case of this particular parade, Virgil’s message gets stronger: “Follow the yellow brick”. 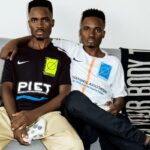 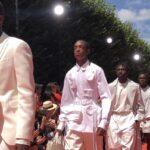