Whenever a hand will raise against a daughter, another hand will be there to fend it off, fierce and intense in her defense. That’s the kind of love a father bears for his little girl. Because no matter what, he remains a man of the world, and has seen violent and despicable thoughts and acts against women first hand. And to witness this ferocious sense of fatherly possessiveness in Ajay Devgan’s character on-screen in Drishyam 2 is a treat in itself.

A story of a traumatized daughter, a shaken wife, and a father’s need to protect his family against all odds. Things aren’t as merry for the Salgaonkar family as the colourful Goan setting suggests. And the way the story slithers around you, forming a web, pulling you in is truly commendable on director Abhishek Pathak’s part.

And today, I will pull the plot apart in this review, piece by piece, to touch on the gems hiding beneath the many layers of this fantastic movie. But before I move forward with this glittering review, I think it’s only fair to give the honorary mention of the original Malayalam movie that inspired this one. Released by the same name, Drishyam 2 starring Mohanlal, was released in 2021 and made waves with its gripping plot and fantastic screenplay. So kudos to the original movie for inspiring yet another version of Drishyam. 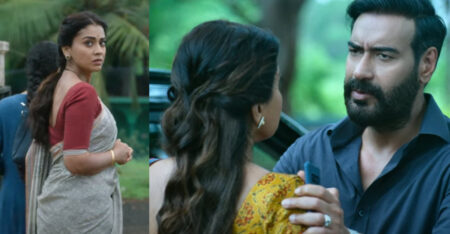 Yes, because Akshay Khanna’s character is determined to unearth the gruesome reality behind Sam’s death in the earlier part. And while, as we all know, things aren’t as black and white as he seems to make it out, it doesn’t take away from the chaos that follows his decision.

Sam’s death in Drishyam, though very well-deserved if you ask me, sure set off a few dominoes against Vijay Salgaonkar and his family. And seven years later, now that they have finally begun settling into their life again, the breadcrumbs that the fateful event between Sam and Vijay’s daughter Anju left are beginning to bite this humble family back. And it’s not going to be an easy ride for this protective father.

Anju’s character has developed rather tragically in these seven years, as she develops a serious condition of epilepsy. And honestly, I am not surprised. to have had to face what she did and so early in her life too, I can’t imagine what subconscious fears and traumas it must have triggered for the poor girl. A lifetime of therapy bills and messed up future relationships is what awaits Anju, as far as I can see, and the least Sam’s mother can do is leave her the hell alone! But no, Tabu’s character, Sam’s mother, has to be a pain about it. Mother’s love and all! *eye-roll*

And yet, Ajay’s character is played to perfection despite everything else that has been going on. The plot simmers off-screen, somewhere in the distance, as the series of events build up to an eventful and exciting climax. God, is it a thrilling ride from the beginning till the end and I am still jittery with the rush watching Drishyam 2 gave me? 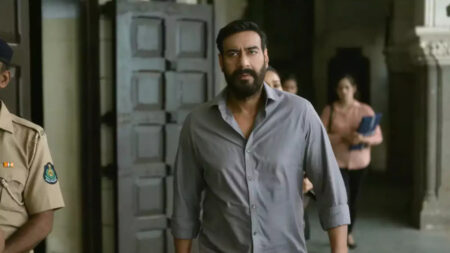 It’s not fair to overlook all the rest of the brilliant actors who contributed to the movie’s success, but what can I say, there’s only a limited amount of space here and I must dedicate it all to Ajay Devgan’s acting with was *chef’s kiss* gorgeous. And I mean it.

Of course, the screenplay by Aamil Keeyan Khan gets a LOT of the credit here, but it wasn’t an easy task – to pick up where the last movie left off, 7 years into the future, and to play the struggling father still trying to pick up the pieces of his broken and scarred family. That’s some heavy work. And Ajay Devgan’s Vijay did it best.

I don’t think anyone could have done justice to the character and the heavy burden he carried throughout the plot. The subtle changes that Vijay goes through are unearthed as the plot deepens and it makes up for any crudeness left by Shriya’s acting, which I didn’t quite like to be honest, but that’s just my personal opinion.

I could go on and on about his excellent skills and the movie’s gripping plot and setting but there’s not much time to lose so let me just part with this – Drishyam 2 managed to fill the gaping hole its predecessor left behind to quite an extent. And I won’t be surprised to hear news of another part in the making soon.