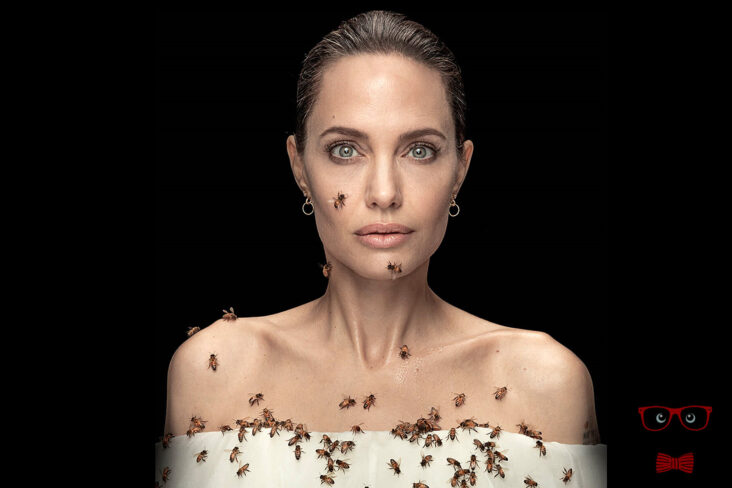 In the film A História da Uma Abelha (2007) we talk about what would happen if these insects made a kind of general strike, describing the consequent apocalyptic state. It is just a fabulous scenario . However, reality is not far from fiction , and bees –  the main responsible for pollination , a process that guarantees the reproduction of flowering plants, enabling the production of fruits and seeds, being still one of the main mechanisms for maintaining biodiversity existing on planet earth – are threatened.

It was to draw attention to this fact that the actress Angelina Jolie agreed to pose for a portrait of National Geographic, published this Thursday, World Bee Day.  In the magazine’s work, the activist also expressed the urgency to protect bees and told a little more about the UNESCO-Guerlain program, which trains women as beekeepers-entrepreneurs and protectors of bee habitats around the world.

The special envoy of the United Nations High Commissioner for Refugees told how she has witnessed the relationship between environmental destruction, food insecurity and human displacement around the world. In addition, Jolie spent 17 years supporting local communities in Cambodia in their efforts to combat deforestation and illegal logging of trees that threaten bees, as well as other wildlife, and the ecosystem as a whole, through a foundation in name of your eldest son, Maddox.

About the UNESCO-Guerlain Women for the Bees program, Angelina told how it is having a double importance : on the one hand, it promotes female empowerment in communities where gender inequalities are evident and, on the other, it calls for the conservation of biodiversity. By 2025, the program aims to build 2500 hives within 25 UNESCO Biosphere Reserves – in Bulgaria, Cambodia, China, Slovenia,  Ethiopia, France, Italy, Rwanda and Russia – and to repopulate 125 million bees. The 50 women to be trained by 2025 will be supported in establishing their own beekeeping operations.

One of the things that impresses in the magazine’s work is Jolie’s exclusive photo shoot, in a sustainable Gabriela Hearst dress, covered by a swarm of bees.

However, it was not easy: “My main concern was security,” explained Dan Winters to National Geographic. “Everyone on the stage, except Angelina, had to be dressed in a protective suit. The scene had to be calm and dark enough to keep the bees calm. Angelina remained perfectly still for 18 minutes.