Any country has its cultural peculiarities. But the more our mentalities differ, the more strange and incomprehensible the traditions, tastes and fashion of others seem to us. China is only one of the states where it is possible to fall into a state of shock by local habits. Pants with an opening in the back for children, the Beijing bikini, buttocks pads: this is only a small part of what causes many questions, of which the main one is “What does all this mean?” .

Bright Side studied the most amazing eccentricities of the people of the Middle Kingdom and tried to discover their origins. We also have prepared a bonus from which you will learn how to leave a 5-story building in a matter of seconds.

When summer begins, Chinese men blatantly expose their abdomens. There are no age restrictions, both the elderly and the young do. Summer men’s fashion received the original name “the Beijing bikini” and spread not only in Beijing, but throughout the country. And for this there are 3 reasons. First, the Chinese believe that in this way the body “breathes.” Second, by displaying your well-fed body, they inform others that they can provide themselves with a “decent” amount of calories.

And the third reason goes back to Chinese medicine. According to her, it is necessary to allow the energy “qì” to circulate freely around the internal organs. It is unknown which of these reasons each Chinese follows. But one thing is clearer than water: this habit has entered their lives firmly. According to the latest data, local Jinan authorities want to ban this trend , since it seriously affects the image of the city and drives tourists away.

We find it strange that some Chinese men prefer to grow long nails . The fact is that for centuries they have been a symbol of wealth in China. Only rich people who were engaged in mental work could grow nails. And short nails hinted that their “owners” worked hard physically and simply could not afford that luxury. Today, some men let them grow on all fingers, while others only on their small fingers, for good luck.

3. The pads to increase the buttocks

Perhaps Kim Kardashian’s glory persecutes Chinese women. Silicone buttocks are gaining increasing popularity among girls. If you had bad luck with natural curves: Chinese manufacturers will offer you a solution. Women in the Middle Kingdom are delighted to experiment with their appearance, it is the fact that in turn they fascinate the manufacturers of various devices aimed at improving their look.

Instead of going to the gym and making the legs more molded, you can take advantage of another Chinese invention, the silicone calves

Such a simple method gained popularity among Chinese fashionistas: it helps visually increase the calf muscles in the blink of an eye. The main thing is to prevent the pads from falling out at the most inopportune moment.

Anatomically, the structure of the eyelids of Asians is different from that of Europeans. But everything that comes from the west is fashionable in China: girls, without exception, dream of having big eyes and open eyes. For this, all means are good, starting with false eyelids and ending with blepharoplasty . The latter, however, is much more expensive. Meanwhile, a kit for the correction of the eyelids at home costs nothing, in addition, with your help, you can get the precious fold over the eye without any problem.

This tradition originates in the distant past, when the girls of the aristocratic families were bandaged their feet to prevent their growth. Such miniature feet got a beautiful name: “golden lotuses.” It was believed that, the smaller its size, the more valuable the bride was. You can still find Chinese women with deformed feet wearing special “lotus shoes”.

7. Tai chi and walk back

The  tai chi or  tai chi chuan is a martial art developed in China. This is a complex of slow movements that people of all ages can perform. ” Walking backwards ” goes back to  tai chi . In the parks and squares you can often see group exercises, when the elderly walk rhythmically along the paths with their backs forward. Sometimes this is accompanied by applause. It is believed that this set of exercises relieves tension in the muscles of the back and lower back. In addition, such unusual displacement requires greater brain activity that serves to prevent senile dementia.

8. Sale of breast milk to millionaires

Chinese women do not usually breastfeed children; Mothers prefer blends. This fact is due to the superstition that is still relevant. According to him, breastfeeding harms the health and figure of the mother. In China it is also believed that milk completely loses its beneficial properties when the baby turns 4 months. But it is impossible to get rid of it overnight, so women try to sell it on various online platforms and specialized websites. As a result, breast milk has become popular among millionaires who add it to their diet, as they believe it is rich in vitamins and minerals. This service is not cheap: it costs around USD 5,000 per month.

9. Mahjong in the pool

In the Chinese city of Chongqing, there is a water park that, in addition to offering water activities, also offers mahjong at a pool table . This game appeared in the 1920s and quickly gained national status. And in 1998, majiang, as the game is also called, was officially recognized as a sport.

The city of Qingdao borders the Yellow Sea. In early summer, the entire coast is covered with  green algae . Every year, local authorities try to fight them, but so far, without success. But for the Chinese they do not represent any problem, escaping from the heat they have no qualms about swimming in the green swamp.

The Chinese hide from the sun in many ways, and some of them are very ingenious. If you find a man buried to the head in the sand on the beach, do not be surprised, this is one of the usual summer rituals of local residents. And to avoid sunstroke or a face burn, use special masks or umbrellas. By the way, the latter are used here to protect against ultraviolet rays even more frequently than against rain.

The Chinese love watermelons so much that they are willing to eat them, even participating in extreme competitions. Some may even eat a slice of watermelon in a fraction of a second, like this Chinese soldier .

Even so, this berry always has a practical application. Just as in China they are small in size, the peel of half a watermelon is used as a bowl for food . It is said that a serving of rice in that bowl cools well during the hot season. 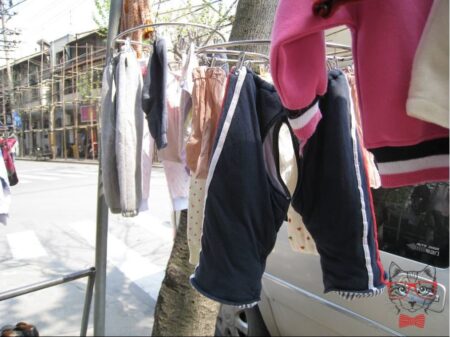 A tourist traveling through China will have to face another cultural peculiarity. Chinese children in the summer wear pants with an opening in the back, they are called “kaydanku” .

Open pants for children were common during the period of the Six Dynasties . At that time, silk was used as the main fabric, at the top they were fastened with an elastic belt or elastic band. Nowadays, these children’s clothes are made of different fabrics: there are winter options and light summer pants, they are used as the common pants. The reason for this fashion is very simple: comfort. A child can do his needs anywhere, all he needs is to squat. Thanks to such pants, the baby learns to use the bathroom faster. It is true that nobody cares about the feelings of others. In recent decades, more and more Chinese parents have been wearing diapers, and this ancient tradition is disappearing.

Oddly enough, this is a very useful invention. The inventor Zhou Miaorong devised the slide that helps to quickly leave the building in case of emergency. For example, the descent from the fifth floor will take only 14 seconds.

Would you like to adopt some Chinese habits, even if they seem strange to others? 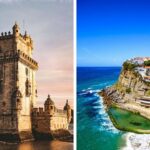 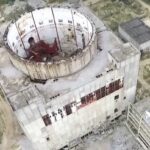