The 24-year-old American singer has had an interesting solo career after the end of Fifth Harmony, a female pop quartet with which she was until 2018. And, in addition to starting a great collaboration with Halsey, the young woman ventured with the single ‘ Expectations’ and the song ‘Lento’ with producer Tainy.

However, it seems that Lauren Jáuregui has had more projects up her sleeve that never finished seeing the light … And it is for this unusual reason that the artist has insulted Jason Derulo. Find out what happened here!

Everything happened from Twitter, a social network in which Lauren Jáuregui has more than 4.3 million followers and in which she usually comments on all those topics that interest her, from her career to politics and social justice.

Lauren, in fact, took advantage of that scenario months ago to ask her fans to be patient when waiting for her music, because in addition to the fact that she is doing her best to offer good songs, there are also problems behind the scenes that they do not understand or will understand.

And what problems! And is that Lauren took her profile on Twitter this Monday, June 7, to reveal that she had worked on a song that was not only never published, but was given to someone else.

The song was about ‘ Make Up’ by Jason Derulo, which came out two years ago with the collaboration of Ava Max.

In this regard, Lauren explained to her fans, who published her original verse, that she recorded her part without knowing that in the end they would not include it in the song and that she did not receive any credit, since Ava Max wrote her own part.

“They didn’t use what I wrote! And the original song was not written by me “, clarified Jáuregui, who, however, added that they are always stealing the opportunity to shine.

“All these motherfuckers who had me in a verse and then decided to cast someone else are going to wish they hadn’t,” Lauren wrote. 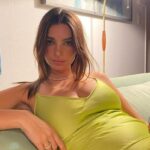