The Ministry of Health reported it through a statement. The patient would not have an epidemiological link with the first confirmed case in the country.

After the confirmation of the first positive case of monkeypox in Argentina , the Ministry of Health of the Nation reported that “the appearance of a new suspected case of monkeypox resident in Spain, who is visiting the Province of Buenos Aires and that has no connection with the first case” .

Through a statement, the health portfolio stated: “The person has ulcerative lesions without other associated symptoms, arrived in the country on May 25 and symptoms began yesterday, May 26, 2022.”

The patient is in good health, isolated and receiving symptomatic treatment, according to the Ministry of Health: “His close contacts are under strict clinical and epidemiological monitoring, all of them being asymptomatic to date.”

In turn, the portfolio led by Carla Vizzotti confirmed the first case of the disease in the country and the region. The patient found out that he was positive from the first electron microscopy study and from the confirmation obtained by PCR.

With these indications and still waiting for the result of the genomic sequencing, the prepaid company and the private sanatorium treated the patient from the beginning as a carrier of monkeypox .

The result obtained from the samples taken from the suspected case determined the presence of viral particles compatible with Poxvirus of the Orthopox genus, a virus that does not circulate in Argentina. The patient is in isolation and in good general condition and his close contacts are under strict clinical and epidemiological control,” the Ministry of Health reported.

According to the official statement, “it should be noted that the patient is in good general condition and in isolation. While the corresponding jurisdictions are carrying out the epidemiological follow-up of the close contacts of the case, all of them being asymptomatic so far.

The patient, a 40-year-old man, consulted last Friday through his private medical coverage. He had a fever and blisters on some parts of his body. A history of travel to one of the countries with an ongoing outbreak of the disease triggered suspicion in the treating professionals.

Monkeypox: what is known about the disease

Monkeypox is a rare disease that has been spreading since the beginning of May in Europe and the World Health Organization began to warn about the origin of the condition, the possibility of its community transmission and what care must be taken to avoid the infections.

The WHO has so far registered more than 200 cases in 20 non-endemic countries. Great Britain, Spain, Israel, France, Switzerland, the United States, Australia and now Argentina are some of them.

Monkeypox is characterized by a rash or skin lesions that are usually concentrated on the face, palms of the hands, and soles of the feet . 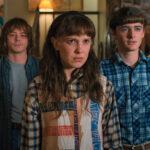 ‘Stranger Things 4’ adds a warning message after the Texas school shooting: “The opening scene can be distressing”
Leave a comment Leave a comment