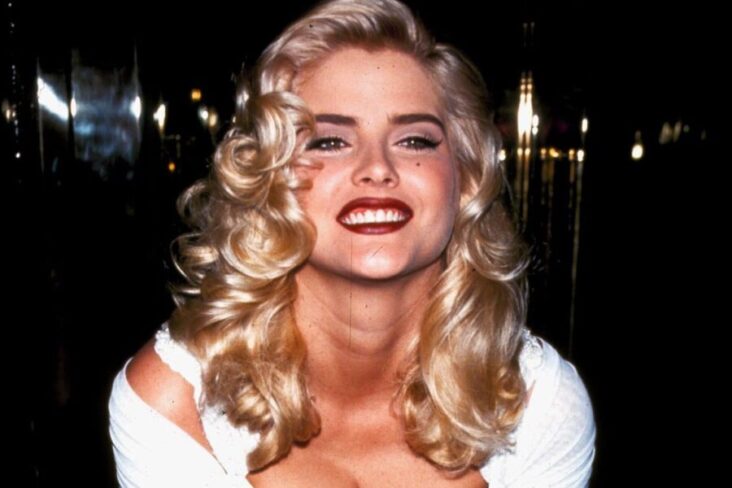 WHO IS THIS WOMAN?

The girl became famous as a model. In 1993, she received the title of Playboy’s Playmate of the Year. In other words, she became the girl of the year. Have a good year? Of course. But it will still be!

In 1994, she marries a gentleman who, to put it mildly, is a little older than her. The spouse soon dies. Do you think the girl immediately began to live a luxurious life? No matter how it is. It took the young widow years to get her share of the tycoon’s inheritance.

This is a brief biography of this woman. Let’s follow her path to glory.

Anna Nicole Smith was born on November 28, 1967 in a small town in Texas. But the baby’s name was different – Vicky Lynn Hogan. Vicki dropped out of school, and her childhood cannot be called carefree. She grew up without a father – he left the family even before the girl began to take her first steps. A common story.

As a teenager, Smith worked part-time in a restaurant. While the girl was delivering fried chicken to the tables, the local chef, Billy Smith, laid eyes on her. The girl married him. She was then seventeen years old.

In 1984, the couple had a son, Daniel. After some time, the marriage broke up. But the girl’s dreams of a brilliant career only grew stronger day by day. Life in the wilderness did not suit the future star. She dreamed of fame. Why trade fried chicken in Texas when you can be the new Marilyn Monroe?

After the restaurant, Smith worked at Walmart. Also not the ultimate dream, you know. Later, the girl went to Houston, deciding to get a job in a strip club. The child remained with Smith’s mother – Virgie Arthur. In 1991, while working at the club, Smith met the same J. Howard Marshall ll. And this is where it all begins.

In 1992, Smith sent pictures to Playboy in which she posed nude. The bold move worked – soon the girl was already filming for Hugh Hefner. In the same year, Smith appeared in an advertisement for the fashion brand Guess. The pictures turned out to be impressive. Anna Nicole Smith looked luxurious and seductive and looked terribly like her idol, Marilyn Monroe.

The following year, the girl joined the “elite” – a select group of models posing for “Playboy”, who received the title of “Girls of the Year.” The model began to tread a path for herself in the world of cinema. In 1994, she starred in Naked Gun 33 1/3: The Final Thrust and Hudsaker’s Handy.

The sexy blonde was bathed in the attention of world publications. The ups and downs of Miss Smith were extremely interesting to the general public. Anna Nicole was not going to pretend to be a sufferer. In an interview with The Washington Post, she said, “I love the paparazzi. They take pictures of me, I smile. I’ve always enjoyed being in the spotlight. I always wanted to be, well, you know, noticed. ”

So, the wedding took place in 1994. Anna was 26 years old, and her husband was 89. Of course, the public could not remain silent. The young wife was accused of all sins. No one believed that she had bright feelings for the tycoon.

According to People magazine, shortly after the wedding, the bride left for Greece without a groom. The couple also did not live together in the final days of Marshall’s life, and the unusual union ended with Marshall’s death in 1995. 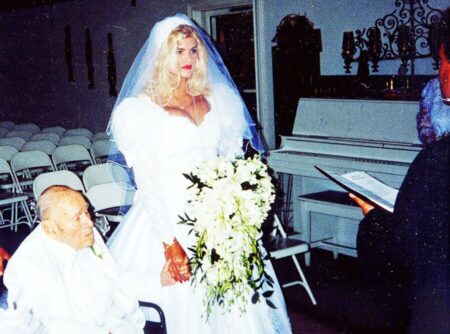 Smith claimed that the late husband promised her that after his death she would not be left without money. But he did not include it in his will. For years, the widow fought with Marshall’s son, E. Pierce Marshall. One trial followed another and so on ad infinitum.

In 2006, the case went to the Supreme Court. Smith was finally able to take advantage of some of the money left behind by her late husband.

In 2002 “The Anna Nicole Show” was released. Viewers of the reality show could watch the life of celebrities in an everyday setting. Sometimes the girl seemed embarrassed and confused, but the audience still watched the life of the blonde with bated breath. In episodes of the show, Anna Nicole is often seen in the company of her lawyer, Howard K. Stern.

The girl struggled with being overweight for years, and in 2003 she became the face of dietary products. Smith lost a lot of weight and focused on modeling and acting. In 2006, she starred in the science fiction comedy Illegal Aliens. Her son Daniel also worked on the tape.

Smith’s career has been much more successful than her personal life. In the summer of 2006, she announced her pregnancy, and on September 7, in the Bahamas, she gave birth to a daughter. The girl was named Dannillin. Smith was happy. But three days later, tragedy struck – twenty-year-old son Smith died of a drug overdose. Anna never recovered from this.

The media went crazy. The death of the actress’s son was protested by editions every day. At the same time, Smith was dragged into the trial. Larry Birkhead, a photographer and ex-boyfriend of the model, claimed to be Dannillin’s father. The very same mother of the girl assured that the father is Howard K. Stern, a lawyer. He was indicated in the baby’s birth certificate.

In the midst of all this madness, Anna and Howard decided to seal the knot … marriage? They had their own fried chicken and champagne ceremony. Yes, their union was not legally secured, but is that important?

Smith died on February 8, 2007 at the age of 39 after she was found unconscious in a room at the Seminole Hard Rock Hotel and Casino in Hollywood, Florida.

During her lifetime, the model regularly appeared in the press, so world publications simply could not ignore the news of her death. As a tribute, Playboy founder Hefner told the press at the time, “She was a very close friend who meant a lot to Playboy and to me personally.”

After Smith’s death, there were many speculations regarding her daughter’s paternity, including one statement made by Prince Frederick von Anhalt, husband of Zsa Zsa Gabor. He told the Associated Press that he had an affair with Smith and that he was Dannilynn’s father.

In April 2007, DNA analysis revealed that Larry Birkhead was Dannilynn’s biological father. Stern did not dispute this decision, and Birkhead was granted legal custody.

There was also speculation about the cause of the reality star’s death, and authorities eventually announced it was an accidental drug overdose. In the days before her death, Anna Nicole took nine different medications. Stern and two others were later found guilty of crimes related to her death. All of these charges were dropped in 2011. Although the charges brought against the star’s psychiatrist were still in place.

During her lifetime, the public treated Anna Nicole Smith ambiguously. Some loved her, others made fun of her. But even those people who treated Smith with coolness admired her success and put her on a par with Jean Harlow and, of course, Anna’s favorite, Marilyn Monroe.

The life and death of the actress has inspired writers, filmmakers and other artists. Books, documentaries and opera – even after her death, Anna Nicole continues to live in the minds and hearts of people. 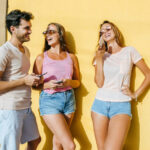 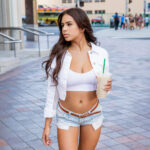