Faced with the Russian threat, the government and the conservative opposition in Germany agreed on Sunday evening to break the budgetary rules of the federal constitution to release 100 billion euros to modernize the army.

A compromise was reached after difficult negotiations that lasted several weeks between the coalition parties – social democrats, ecologists, and liberals – and the conservative political family of former chancellor Angela Merkel, representatives told AFP. of these movements.

The agreement will fulfill the promise made by Chancellor Olaf Scholz at the end of February after the outbreak of the Russian offensive in Ukraine. The German leader had promised to release a special fund of 100 billion euros to rearm his country over the next few years and modernize the Bundeswehr, whose equipment is dilapidated.

Berlin will thus be able to achieve the objective set by NATO of devoting 2% of its national GDP to defense. This objective will be achieved on average over several years, according to the text of the agreement obtained by AFP.

The exceptional fund will be financed by the national debt. To make the operation possible, it was necessary to circumvent the rules enshrined in the country’s constitution concerning the brakes on indebtedness, which strictly limit the possibilities of a budget deficit.

The government needed the support of the main opposition force, the CDU/CSU canners, to secure the two-thirds majority in parliament needed to pass the measure. The 100 billion euros will be paid into a special fund, outside the national budget.

Negotiations were arduous concerning the use of the money, but also concerning the policy towards Ukraine, on which the government and the opposition have been clashing for weeks. The conservatives criticize the Social Democratic Chancellor for the timidity of his support for Kyiv in the face of Russia in terms of arms deliveries.

The release of 100 billion euros for the national army constitutes an important reversal for Germany which, in recent years, has been dragging its feet to comply with the commitments of the Atlantic Alliance. The country has also regularly drawn the wrath of the United States. Since the end of the Cold War, Germany has significantly reduced the size of its army, from around 500,000 when the country was reunified in 1990 to just 200,000 today.

In addition, military officials regularly complain of breakdowns in their fighter planes, warships, or tanks. But the invasion of Ukraine acted like an electric shock in a country steeped in pacifism since the horrors of the Nazis. 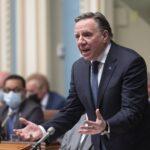 Confrontation in sight with Ottawa: Legault is determined to repatriate immigration
Next Article