USA. – This Monday, Lyna Pérez decided to make the week happy to her millions of followers on Instagram, sharing 2 sensational photos in a bathing suit.

In the first snapshot, we can see the model lying on an armchair, while she brings her right thumb to her mouth, and makes us witnesses of her stunning rear.

For the second image, Lyna is placed on her knees, directing her gaze to the side, allowing us to appreciate her exuberant figure, exalted by her bathing suit.

Without a doubt, with her photos, the Latina has managed to steal the hearts of her millions of followers, who are left breathless in each of her postcards.

Within the post of the socialite, we can read a description in which it tells us that it saved us a seat, in addition to asking ourselves which of the 2 snapshots we liked the most.

Currently, Pérez’s post has managed to exceed 180 thousand likes, and her fans have already filled the comment box with their praise. 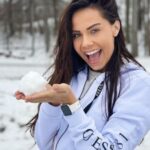