Kate Moss could be called by the legal team of Johnny Depp as a witness in the trial against Amber Heard, it has been spread on several news portals; Moss and Depp have a close friendship and were a couple of years ago.

Kate Moss‘s name comes to light in the media lawsuit between Johnny Depp and Amber Heard, and perhaps few know that the actor and Kate had a romantic relationship in the 1990s.

Kate Moss could be called to testify as a rebuttal witness by her legal team in the ongoing trial between Depp and his ex-wife Amber Heard, and her participation in the trial would be key to the end of it.

Recall that Johnny Depp sued Amber Heard for 50 million dollars alleging that a 2018 opinion piece that she wrote in the Washington Post defamed him, since it, did not mention him by name, it falsely described him as an abuser.

Heard, meanwhile, has countersued Depp for $100 million and says statements made by his lawyer calling his abuse claims a “hoax” were defamatory.

But let’s focus on Kate Moss. She is one of the most controversial models, mainly due to her low weight at the beginning of her career, originally from the town of Addiscombe, within the South London suburb of Croydon (Surrey).

Kate was discovered in 1988 by Storm modeling agency founder Sarah Doukas when she was 14 years old and became the anti-supermodel of the 1990s.

After posing for Harper’s Bazar magazine, she rose to fame and has worked for firms such as Gucci, Dolce & Gabbana, Versace, Chanel, Missoni, and David Yurman, among others.

For years Kate Moss was criticized for her extreme thinness, even some newspapers accused her of promoting anorexia with her look, she has also appeared in comedy series and documentaries about models in which she plays herself.

Kate Moss has also been noted mainly for her excesses with drugs and alcohol and in the sentimental field, it is known that she had a relationship for four years with the famous actor Jhonny Depp, who has referred to her in several interviews as one of the most important women in his life.

Kate has been romantically related to Jefferson Hack, the father of her daughter whom she had in September 2002, and in 2005 she met rocker Pete Doherty, who was facing drug problems and stole her heart, but almost ended his career. .

Kate, 48 years old, had to leave it and enter a detoxification clinic of her own free will where she was able to overcome her addictions, and after recovering she manages to lift her career,  sign many contracts and succeed again now alongside Roberto Cavalli.

Kate Moss has managed to position herself as one of the most sought-after models in the media and according to information in her biography, she remains single today and appears on the covers of media such as Vogue and W, she is also considered by Forbes to be one of the richest and richest celebrities. world influencers. 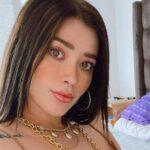