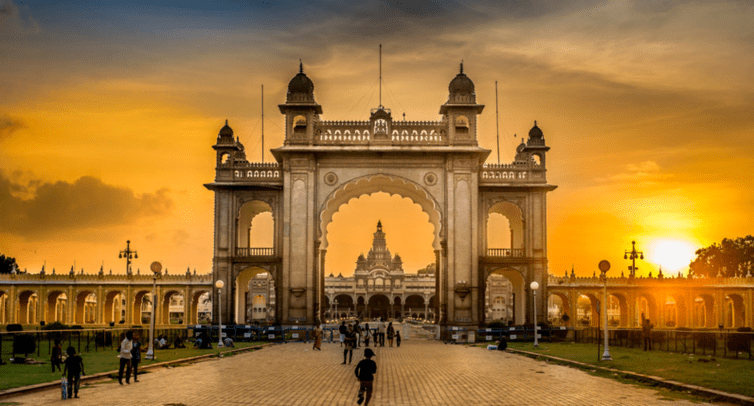 Mysore, or Mysuru since it is officially known currently, is one of those destinations that attract you with irresistible ancient grandeur and pay homage to heritage and culture by their very existence. The city is not very large and can be easily explored using a good public transportation system. We’ve compiled a basic list of places to visit around Mysore based on what you want to do on any given day. Every curve and corner of Mysore has a story to tell, from palaces that speak of splendor and sites of worship with rich cultural history to magnificent architecture and museums. Whether you are seeking a weekend getaway from the hustle and bustle of urban life or vacation of South India, exploring the city will be a dreamlike adventure for the heritage enthusiast in you. So, for a short glance into Mysore’s illustrious history, here are the top ten locations for weekend getaways from Mysore.

The second most famous attraction in India (the first being the Taj Mahal) and certainly the best place to visit in Mysore is Mysore Palace, one of the most imposing architectural buildings in the country. It is amazing that the palace was only built in the 20th century and is the fourth structure to be constructed in the same location. Also known as Amba Vilas Palace, it is one of the seven palaces in the City of Palaces. Often mistaken for a Gothic structure, the Palace is, in fact, an exemplary showcase of Indo-Saracenic architecture with a blend of Gothic, Rajput, Hindu, and Muslim styles and it is one of the famous places of Mysore. There’s no way one can miss visiting this historic and marvelous place.

The Brindavan Gardens are located just a level below the Krishna Raja Sagara dam. It is a major tourist attraction for all the Mysore and KRS dam visitors. It is also regarded as one of the most beautiful gardens in the state of Karnataka. The most popular and exciting experience at this garden is the musical fountain that is scheduled in the evenings.  Being one of its kind, Brindavan Garden attracts tourists from across the world.

One of the most famous gardens in Mysore, the Kishkindha Moolika Bonsai Garden houses many varieties of bonsai plants. Regarded as one of the most peaceful places to visit in Mysore, the garden is a very popular spot for families travelling with children as it offers an extensive educational opportunity for kids to know about the many bonsai plant species. Come here with your children and explore this garden in Mysore.

Among the many famous tourist places, the Folklore Museum in Mysore is dedicated to the folk arts and crafts from all over Karnataka. Founded in 1968, it is located within the campus grounds of the University of Mysore and has played a major role in the studies of folk arts and crafts in the state. Boasting over 6500 unique memorabilia dedicated to dance, music, literature, art, and much more, the museum also presents an intriguing collection of puppets, props, masks, and other folk objects which have been a common aspect of folk drama.

With nature lovers, religious travellers, and photographers pouring in from all over the world, Chamundi Hills is one of the most popular places to visit in Mysore. It is also one of the best points for a panoramic view of Mysore city. You can reach the hill summit either via road or for something more adventurous, take the stone stairs.

Witness the serenity of nature, closest to your vicinity. Not far from Mysore, Rangantittu will provide you a picture perfect outing. Take a break from your routine and relax at this mesmerising nature’s nest. Rangantittu is a popular hub amongst all bird lovers as it is one of the biggest bird sanctuaries in South India.

One of its kind in the city of palaces, GRS Fantasy Park is the most exciting and enthralling tourist destination to be visited in Mysore. With a number of land and water rides, it is a hub that will surely excite and delight kids. It is a one-stop destination that will occupy your entire day and make it a fun-filled experience. This awesome fantasy park is a bridge between the modern and historical Mysore that we all know off.

Located at the stone throw distance from the city of Mysore, Nagarahole National Park is located in the Kodagu district of Karnataka. Taking land area from Coorg and Mysore this national park is a home for great wilderness and one of the best nature places in Karnataka. The most popular attraction in this national park is spotting elephants and other animals. Walk a step closer to the wild as you ride through the jungle safari and experience the elephant trek in this heart throbbing wildlife destination- Nagarahole National Park. This place would be a great spot for your children and family.

A must-visit destination for every tourist, Devaraja Market is included in many heritage walks covering Mysore. Featuring over 300 shops and spread over 3 acres, the market has a wide selection of items to choose from and it is one of the best Mysore tourist places. One section is dedicated to fresh flowers, while the other only sell puja materials. You can also buy fresh fruits and vegetables here, along with jaggery, puffed rice, and coconut water. As suggested and advised by many, this market would be the best place for tourists to shop.

While it looks unassuming from the outside, this shop is choc-a-bloc with great buys. It showcases some of the best items Mysore has to offer such as pashmina, clothes, shawls, rugs, carpets as well as sarees and home décor items. The staff is helpful and well-versed with the products, offering you an insight into the history of it. It’s a great place to pick up souvenirs to take back home. Shopping here would be an exciting experience for you.

People believe that the more we discover about our heritage, the more equipped we will be for tomorrow. We have no idea how accurate this is. But one thing is certain, even a day trip to these locations will captivate you and transport you back in time. Aside from the locations mentioned above, this city boasts a plethora of additional hidden jewels for history enthusiasts as well as plenty of places in Mysore for couples. This is only a starting point. Get a Mysore map tourist places and you’ll be able to locate several places that will transport you back in time. You may acquire one at the train station or the airport. However, before purchasing the map, reserve a hotel in Mysore for a pleasant stay near these renowned attractions. 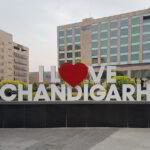