The boat in which five people, including two children, were seated, capsized on the Dallaire stream and only four people were able to be rescued.

Late Saturday evening, the Sûreté du Québec revealed that the two children were still under observation in the hospital, but in stable condition. One of the adult victims had been discharged while the other was in critical but stable condition.

According to information gathered by the police, only the children were wearing their life jackets on board the boat.

The boat would have capsized for an unspecified reason and the emergency services of the MRC de Manicouagan were called to the scene shortly before 1 p.m.

Four victims, including children, were quickly rescued and transported to a hospital. In the case of the fifth victim, they had still not been able to find him by nightfall.

A boat from the fire department and another from wildlife officers crisscrossed the body of water for several hours, without success. An SQ boat also joined the search while police searched the banks.

The spokeswoman for the SQ, Hélène St-Pierre, indicated that patrollers would remain on site during the night and that a command post would be erected at daybreak. Two SQ boats will resume research on the river and divers will join the operation. 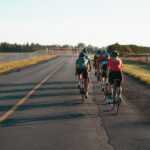 Tour de l’Île: thousands of cyclists in the streets of Montreal on Sunday
Next Article