At a special session on Friday, the Tyrolean state parliament decided to dissolve it, paving the way for an early election on September 25th. The coalition parties ÖVP and Greens as well as the opposition parties SPÖ, FPÖ, and Neos voted in favor – only List Fritz was against. The new election was scheduled due to the announcement by Governor Günther Platter (ÖVP) that he no longer wanted to stand in the upcoming election. On this occasion, the latter also held his last major speech in the state parliament – and received standing ovations from the ÖVP, Greens, SPÖ, and Neos.

“We in Tyrol have not let ourselves be infected by the brutalization of political culture at the federal level,” said Platter, who has been in office since 2008. Although the choice of words in the political debate in Tyrol has also tightened, the governor added. “We have to think about the political culture, how we treat each other – including politics with the population and the population with politics.” “Behind every politician, there is a person with a family,” Platter emphasized in the “Current Hour” and spoke again of “threats, hostility and insults” that he and those around him had experienced, especially during the Corona period.

As expected, Platter was full of praise for his designated ÖVP successor and provincial governor candidate Anton Mattle: “He is a person who unites and does not divide. Tyrol needs a person like him who looks at the country and the people”. Platter defended the early state elections, saying that the country wanted to avoid a “nine-month permanent election campaign”. Otherwise, the head of state once again recapitulated his 14-year tenure, during which Tyrol was steered very well through all crises and at the same time made innovations.

With the formation of a black-green coalition in 2022, they have “embarked on new paths”: “We dared a political experiment. Many other federal states smiled at us at first.” But in the end, they “balanced out” and solved many problems “without a dispute”. Finally, Platter thanked everyone – political colleagues, competitors, and his closest team.

The “farewell” to Greens Deputy Governor Ingrid Felipe was a little shorter. The black-green coalition was able to “realize and implement many things”. “We have set the course in the country,” said Felipe, referring to many public investments in nature conservation and public transport. Felipe also introduced the realization of a climate and sustainability strategy. She especially thanked Governor Platter, who always supported the implementation of the coalition reforms. Felipe also received standing ovations – but SPÖ, FPÖ, and List Fritz did not join.

An accident with a tractor in Zwettl, killed a toddler
Next Article 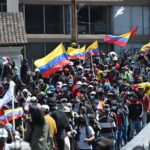