CANADA – The world is full of beautiful natural wonders that travel lovers can not miss, although they are left with the desire of some, such as Lake Abraham, in Canada, which is amazing.

This landscape is extremely beautiful and famous for its imposing landscapes, but it is potentially dangerous, as a natural phenomenon occurs below its icy surface that could even kill a human if you do not know how to explore it.

This phenomenon begins when bacteria feed on decomposing plants and animals, which have accumulated along the bottom of the lake; this process releases methane, a powerful greenhouse gas that contributes to climate change, in the form of thousands of bubbles that float to the surface of the water.

If the lake is frozen, the bubbles are trapped in frozen and suspended piles, but when the thaw arrives it is released and the resulting scene is that of a lava lamp from nature, albeit with gases harmful to humans.

So much is the beauty of this place, however, its level of danger is also great, so it is not recommended to visit it during the spring season. The gas that comes out of this lake is no joke, as it has methane molecules up to thirty times more than carbon dioxide, which contributes to global warming.

So visiting Abraham’s Lake, in Canada, is a careful walk, as these bubbles could explode at different temperatures and harm those around them. If only this is the place with methane bubbles, there would be no problem for the world, but they are common in thousands of lakes in the north, which affects global warming and the atmosphere. 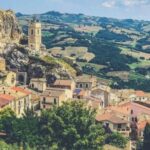