Everyone, or maybe most people, has heard Mia Khalifa’s name at least once, even though she has not seen her work. And the fact is that the young film adult film became a legend in the industry for its charisma, sensuality, daring and its Lebanese origin.

DO NOT MISS IT: WhatsApp: Do you want to have Mia Khalifa? With this trick you can achieve it

Definitely, this last factor is the one that has most attracted the attention of her and, why not say it, the one that has assured her success with only three months in this industry. However, it is also their main headache.

On more than one occasion, he has admitted that the main reason why he left the cinema for adults was the death threats he started receiving from ISIS (religious extremists from his native country, Lebanon), but they are not the only ones who Has to worry.

“I guess they harass me in person, and that’s why I do not really go out. I became very tough, so I feel uncomfortable talking about the #MeToo movement because I do not feel like I’m part of that, “confessed Mia in an interview for the BBC.

It is worth mentioning that the Me Too movement was born on Twitter with the aim of making a halt to harassment and abuse, however, this cybernetic ‘stream’ has not included as it is due to the beautiful Khalifa.

On the other hand, during the interview, they asked him if he used to be indifferent with the other people to whom he answered yes and not just for being a public target of ISIS.

“More or less yes, especially because people approached me, and not everyone was educated, and they asked me for a photo. My demographic group is predominantly male, between 18 and 24 years old. Combine that with me going out with my friends to a bar, people drinking, interactions with people … I would say that 60% goes from rude to scary, so I always ‘look over my shoulder’. Not only for ISIS, but for all those who approach me, “he explained.

YOU CAN BE INTERESTED: She uploaded a provocative photo to Twitter, but instead of compliments, they trolled her

In this way, it is clear why Mia Khalifa, who now ventures into other areas such as cooking and sports, is forced to create ‘walls’ that separate her from her ‘followers’, who with the pretext of taking a picture, they harass her, judge her and even humiliate her past. 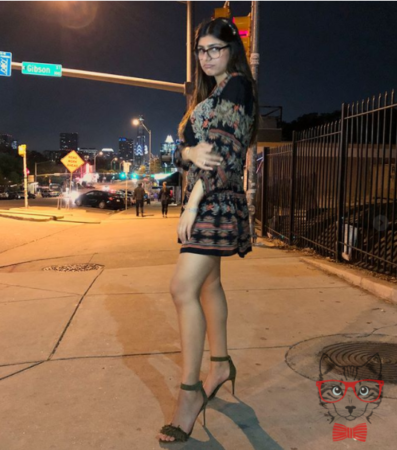